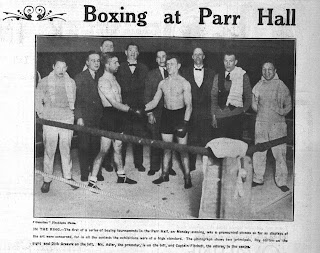 This wonderful institution contains a copy of virtually every newspaper printed in the UK and is further supplemented by a large collection of overseas newspapers. I visit the library about four times a year for about four or five days each time. Richard travels up one day per week. Between us we are slowly working our way through hundreds of local newspapers in a search for long forgotten boxing contests that were not reported in Boxing News.

Although it is an arduous and gruelling task, it is also hugely rewarding and enjoyable. One is transported back in time by reports of long-forgotten murders, scandals and rail disasters, a world of coal mines and football matches where the star players were called Bert, Ted and Wilf and played in front of 50,000 spectators for a fiver a week.

Last week I was researching the Lancashire area for the early 1930s and came across a bill in Warrington for which I had previously had only scant details. As well as detailed reports of the contests, from which I could properly complete the bill, there was also a magnificent picture. It is very rare indeed to get pictures of boxing matches in the newspapers of this period and the one I saw on page 9 of the Warrington Guardian (edition: Saturday February 28th 1931) was a real beauty.

The contest had taken place at the Parr Hall in Warrington the previous Monday evening and the two principals, Dick Greaves of Salford and Roy Hilton of Hollinwood, had boxed twelve close rounds with the verdict going to Greaves.

These two were very typical of the boxers of that period. I have traced 83 bouts for Greaves and 89 for Hilton. I have no doubt that they both had in excess of 100 contests and I hope one day to be able to prove this. Neither of them was good enough to get close to an area title shot, let alone a match for a Lonsdale belt. They regularly boxed 12 and 15 rounders and averaged about eight contests per year.

The promoter of the bouts was Harry Adler, about whom I know nothing. Harry, I imagine, was a local businessman of some sort who had an interest in the noble art and enough money to gamble on running the occasional boxing tournament. He promoted another show at the same venue two weeks later but then nothing further as far as I can tell.

Hilton and Greaves would have met at about 9 stone. They would have been properly contracted and would have earned around £8 to £10 each for the contest. I am pretty sure that the bill was licensed by the newly formed British Boxing Board of Control (BBBC) and the event would have attracted about 1,000 spectators, each paying from 1s (5p) to stand to about 4s (20p) to sit at ringside.

The referee for the contest was Captain Norman Fitchett of Cheadle, a good class featherweight from 20 years previously. Fitchett was a very active referee in rings around Lancashire and Yorkshire at this time.

So, another bout added to the records of two fine boxers, and a marvellous memento of the occasion rescued from the vaults of the newspaper library and reproduced here. I am particularly pleased by the discovery as until now I had never seen a picture of either boxer. So many of these fine fighters are forgotten now and to be able to bring them back into the limelight is especially rewarding.

I hope to make this a regular feature and when I return to Colindale later this year I hope to dig out another similar photo and rescue it from ‘archive oblivion’.