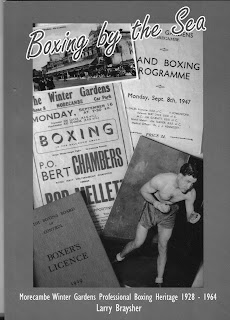 The book has many attributes and these include the many excellent items which Larry has selected for reproduction from his collection, particularly some marvellous photographs, programmes and handbills. Larry has also sought out a number of the surviving boxers from Morecambe and Lancaster who fought at the Winter Gardens and, through them, he tells the story of how the venue thrived throughout the 1940s and 1950s. Another strong point is the inclusion of around 20 boxing records for many of the lads from in and around Morecambe who boxed at the Winter Gardens many times. Most of these records have never been published before and they make a useful appendix to the text.

The book also tells the story of the visit of future World heavyweight champion Primo Carnera, who boxed an exhibition at Morecambe in 1931, the sad story of the only ring fatality to ever take place at the venue, and has pen pictures of many of the leading ex-boxers who refereed at the hall.

I would strongly recommend this book and copies can be ordered direct from: