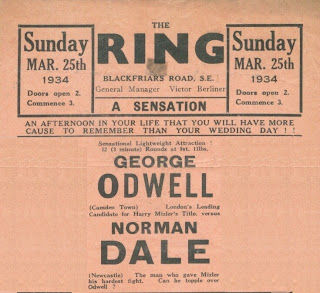 The real quality was on display at the Ring, London's leading small hall at the time. There were five bouts on the bill, two ten-rounders involving heavyweights and three contests over twelve rounds. Top of the bill was a match between the big-hitting Camden Town puncher, George Odwell and Norman Dale from Walker in Newcastle-upon-Tyne. At the time these two were at the front rank in the lightweight class and they were matched at 9st 11lbs.

Dale had come down to London in late 1933 to take on Harry Mizler and had lasted the full distance at the Blackfriars ring. He had stayed on in London to further his career, as Newcastle, despite being an extremely busy and important fight centre, was just too far away from the action in London for a boxer from there to truly reach the top. He had met with reasonable success by March 1934 and the match with Odwell as a real tester.

Odwell was a very big puncher with a fearsome reputation. He had gone 47 bouts since his last loss (in 22 months) and the ringside betting boys would have made him the favourite to win this one. However, Dale (below) was a very classy performer and he taught the Camden Towner a real lesson.

The report of the contest in Boxing states that "Dale was on top throughout, except for a short spell in the second round when Odwell proved effective with a double-handed attack, mainly to the body. Dale was never troubled after that, and he built up a commanding lead. He hit the harder, and with the greater accuracy, and he was infinitely superior in defence, so that in the final rounds Odwell was very much hurt and troubled. It looked as though Odwell needed far more experience against strong, skilful boxers, if he is to make the headway that has been expected of him. As it is, he is terribly lacking in versatility, and seems to rely almost solely on efforts to finish matters with his good right hook. But that was not nearly enough to make any headway against Dale."

It was Odwell who made the most progress after this contest and later on in the decade he became just short of championship standard. Dale lost to Sunderland's Douglas Parker in a bid for the Northern Area Lightweight Title in September 1934 and he retired in 1935, his great potential partly unfulfilled.