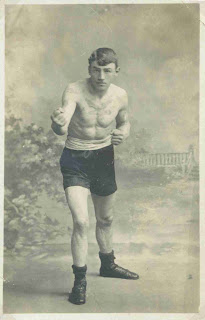 His many contests with Driver Windebank created a lot of interest in the Woolwich district, while he defeated Ted Moore, of Tidal Basin, in nine rounds for £25 a side at the National Sporting Club. He met Young Lippo in a fifteen rounds contest at Plymouth on one occasion, but was outpointed by the local man.

Darley, who was exceedingly popular with the men of his company, went out with them to India, but soon after arrival volunteered for service in connection with the Persian Gulf expedition, and was attached to general Townsend's ill-fated force, which capitulated at Kut. As Corporal Darley he came from Ireland early in 1914 to Swanley (Kent) where his wife and family are still residing.

Darley was an exceptional Army boxer of the Edwardian era. My record for him shows 36 victories from his 48 contests and he boxed Windebank six times in all, including his final contest when the two met for the Kent Featherweight title on October 27th 1913. He died on 27th October 1916 and at the time was the Company Sergeant Major (service No. L/6078).