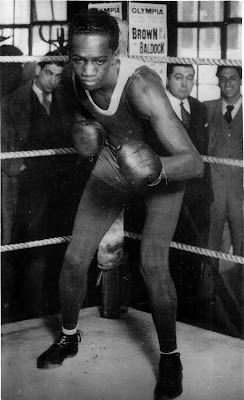 He turned pro at 21 and took America by storm, then travelled to Europe in 1926. Fighting mainly in Paris, Brown earned a fearsome reputation on this side of the Atlantic and in June 1929 beat Spain’s Gregorio Vidal in New York to became Latin America’s first world boxing champion.

British fight fans had read all about Al Brown but did not get to see him perform in their home country until 1931. Fervently embracing Parisian nightlife, Brown had made France his European base and until the 1930s rarely boxed elsewhere in Europe.

And so his first fight on UK soil was an exciting event for British boxing enthusiasts; the clamour to see in action this freakishly built, freakishly gifted boxer from exotic climes was huge. Manchester, it turned out, would be the first city to have the privilege.

The King’s Hall at Belle Vue was the venue and it was filled by 5,000 fans, all eager to get a glimpse of the 28-year-old world bantamweight champion. At the weigh-in Brown was 1 1/2 lb over the contracted 8 stone 10 lb weight for the match, while his opponent, Willie Farrell (Winlaton), was well inside. Brown said he’d thought the contracted weight was 8 stone 12 lb and agreed to pay a forfeit. As Farrell was eager to go ahead and raised no further objection, the fight proceeded as planned.

“Brown had a considerable advantage in height and reach and, moreover, at once showed that he is a real champion. A thin, wispy man, he does not look as though he would be able to produce any formidable punch. Yet without putting out any marked effort, he sent Farrell to the boards twice in the opening round, and further outboxed the Winalton man with consummate ease.

“Farrell tried desperately hard to connect with a punch, but Brown side-stepped, swerved and swayed and baulked each of his opponent’s attempts. In the second round the plucky Winlaton youth tried to work his way in by crouching low and rushing. It was plain that he wanted to get close enough to smash blows to the body, but the World Champion seemed to be able to keep his opponent at the end of his glove whenever he wanted to do so. He was also as readily able to hook or jab his man with either hand.

“It had become plain before the third round opened that Farrell could have no chance, and it was evident that Brown did not intend to waste time. Farrell was dead game, but he was outclassed. He tried every move with which he was acquainted, but could never get near enough to land any damaging punch, whereas Brown caught him on the jaw with a left hook, which dropped him for a short count. Willy rose pluckily, but only to be dropped twice more, whereupon, as it was obvious that he could have no possible chance, the referee, Mr Joe Bowker, wisely applied the closure.”

Referee Joe Bowker, himself a former world bantamweight champion, told Boxing he had been eager to see the latest world champ up close and was quoted as saying, “For sheer sparkling brilliancy, Brown, in my opinion, is in front of the great George Dixon, the original ‘Little Chocolate’. Whether Brown could keep as cool and scientific when under fire as did Dixon, I do not know. I have seen many boxers who are simply wonderful when they are away out in front, but who go into their shell when they are faced with stiff opposition. I am not suggesting that Brown would do this. He shaped like what he is, a 100 per cent World Champion.”

Evidently just as impressed by Al Brown, Boxing made a gloomy forecast on the likelihood of a British boxer beating the champion. It wrote, “We have to ask ourselves whether we can produce any bantam capable of lowering his colours… Farrell was conceding several lbs in weight, but on the running of the exchanges on Monday evening, it is not to be supposed that he could have had a chance in any event. Yet Farrell on form is one of our leading bantams.”

The boxing trade paper also doubted whether a British boxer would even be able to challenge Brown for his world title, owing to the ridiculous ‘colour bar’ that prevented black and mixed-race boxers contesting titles in Britain. “Our sapient Home Office has refused to sanction any mixed-colour championship contest,” it noted, “but it is possible that a fight might get staged in Paris.”

Despite Boxing’s prediction, in 1933 Brown defended his world crown against a British fighter – on British soil. Again fighting at King’s Hall, he was challenged by Manchester’s Johnny King, the reigning British bantamweight champion, who put up a valiant effort but lost on points over 15 rounds.

Johnny Cuthbert was the only British fighter to secure a win over Brown, while – of Brown's British opponents – only he, Nel Tarleton and Kid Pattenden managed to draw with the Panamanian. Hats off to them for achieving a feat that few others could.