Two-Fisted Gentlemen: a history of boxing in Widnes and Runcorn 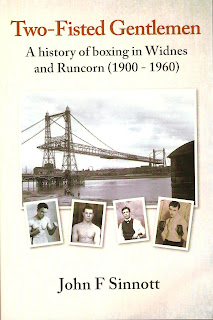 Two-Fisted Gentlemen: a history of boxing in Widnes and Runcorn (1900-1960). Paperback; 277 pages; many rare photos & boxing illustrations with a comprehensive index John Sinnott has recently produced this excellent book on the rich boxing history of Widnes and Runcorn.

Born in Widnes, Cheshire in 1951, John’s interest in local boxing history began in 1984 when he started to research his own family history and discovered several local newspaper articles from the 1930s and 1940s written by his great uncle Pat Sinnott (1882-1949). The subject of some of these articles related to a number of former Widnes boxers, whom Pat had known personally and watched some of their contests from the ringside. After more than 25 years John has finally realised his long-held desire to see his ‘labour of love’ translated into a book to be enjoyed by avid readers of boxing history everywhere.

Every effort has been made in the book to honour the memories of all the many people involved (amateur and professional boxers, their trainers, managers and promoters) in putting both towns on the boxing map of the nation. It is not just a local history of the sport, it is also in part at least a socio-economic commentary on a period which embraces two World Wars and the austerity years of the 1930’s – referred to in the book as ‘the hungry years’.

With a foreword by eminent historian Derek O’Dell, the book tells the story of boxing in these two towns from the bare-knuckle days through to the reunion, in 1961, of the prominent Widnes and Runcorn boxers of the 1930s and 1940s. There are many photographs of fighters from this period, some of them quite rare and John has drawn extensively on his collection of handbills, many of which also feature within the text.

I would recommend this book to anyone with an interest in the sport. Two-Fisted Gentlemen can be purchased direct from the author for £18.99 (incl. p & p). John F Sinnott 173 New Lane Oswaldtwistle Lancashire BB5 3QN 01254 351526