Johnny’s real name was Charles Henry Hughes and he was born on 30 January 1883, at 34 Berwick Street, Soho, site of the famous London market. He started boxing on the booths at an early age and had his first recorded professional fight on 15 August 1900 – a first-round knockout win at Stalybridge over Dave Johnson – but it’s likely he had other bouts before this one.

In the first 12 years of the 20th century – a time when there were plenty of first-rate eight-stone men around – Johnny established himself as one of Britain’s leading flyweights and also mixed it with the best bantamweights. Wins over such notables as Sid Smith (future world flyweight champion), Tancy Lee, Jim Kenrick, Buck Shine and future European champion Charles Ledoux adorn his record. But he had the bad luck of boxing at a time when confusion over championship honours was rife.

Before the National Sporting Club (NSC) introduced its Lonsdale belt system and eight standard weights, there were often multiple claimants to the championship titles of Britain, or England, as the titles were generally billed. Rival promoters would produce their own belts and arrange fights between pairs of leading boxers for their version of a championship. But not only were there multiple title claimants but multiple interpretations of what the correct poundage for a weight class should be. For example, there were championship fights staged at 7st 6lbs, 7st 8lbs, 7st 10lbs and 7st 12lbs as well as at 8st.

During this period, Johnny’s victories meant he validly laid claim to the flyweight championship of England, but this, like the claims of other belt-winners of the era, lacked official endorsement.

In 1911, the NSC issued the first Lonsdale belt for the 8st flyweight division but oddly it left Johnny Hughes out of the reckoning. At the time he was on top form and had beaten leading flyweight contenders Jim Kenrick, Bill Ladbury and Harold Root as well as the brilliant Frenchman Charles Ledoux. True, Johnny had lost to Ike Bradley and Johnny Curran (on a disqualification), but these two were bantamweights.

June Hurst says her grandfather had fallen out of favour with the NSC because he took a particular match against the club’s wishes and had further harmed his case by complaining about the NSC’s autocratic ways in the press.

In December 1911, Sid Smith (Bermondsey) won the first flyweight Lonsdale belt and then sailed to America. In his absence, in March 1912, the enterprising promoter Jack Calaghan matched Johnny Hughes with Sam Kellar over 20 rounds at the King’s Hall in an 8st match billed as being for the world’s flyweight championship. Johnny won on points but despite the world-title billing it was Sid Smith who became the first widely-acknowledged world flyweight champion in 1913, when he beat Eugene Criqui.

Disillusioned with the situation in Britain, in September 1912 Johnny sailed to America to fight. He had three known bouts there – including one against the reigning world bantamweight champion, Kid Williams – but was forced to return home when he heard his young son was seriously ill back in London.

His dreams of US glory gone, by February 1913 Johnny was back in action in Britain, but at age 30 his best fighting years were now behind him. He had two of his most memorable fights that year, though, against Welshman Bill Beynon, a future British bantamweight champion who at 22 was eight years his junior.

The first was arranged by the ill-fated financier Jimmy White, a keen boxing fan. To entertain his friends he staged a bout between Hughes and Beynon at the Adelphi Club before a select private gathering of only 77 onlookers, most of whom wore evening dress. The pair fought a frantic 20 three-minute round battle to a draw and were re-matched at the Canterbury Music Hall in another 20-rounder five weeks later, which again ended in a draw.

These two fights were regarded at the time as two of the fiercest British ring battles ever waged between little men. Leading boxing impresario Jack Callaghan, who was among the select group who witnessed the Adelphi Club war, many years later named it as the most ferocious fight he ever observed.

‘The men boxed wearing small gloves and no quarter was shown by either,’ he said. ‘It was terrific. I’ve never seen anything like it. They fought each other nearly to a standstill and, at the end, you could hardly recognise either of them... The lads were themselves again within a few days, which shows what the human form can withstand.’

Charlie Rose recalled how the fight nearly fell through at the eleventh hour because of Johnny’s astuteness and unwillingness to be pushed around.

‘Hughes refused to strip unless his purse money was paid in advance,’ wrote Rose. ‘Jimmy White had come along quite unprepared for such a contingency, and Johnny laughed to scorn his offer of a cheque...

‘Johnny sat dumb as an oyster, and firm as a rock, while Jimmy’s language reverted to that of his days when he was laying bricks for a contract price. Ultimately he contrived to borrow tenners here, and fivers there, from the gentlemen he was entertaining, and Johnny stripped.

‘What a fight those two boys put up! Personally, I considered Johnny should have got the decision, but as the referee did not think so, that was that. Jimmy White was so delighted that he buried whatever hatchet he had so far as Hughes was concerned, and when I left he was nearly wringing the great little fighter's hand off.’

During the twilight years of Johnny’s 23-year pro career he lost more often than he won and it’s fair to say he went on long past his prime. But he remained a top-liner and was always a popular performer.

In the Allied tournament at the Albert Hall in 1918 he lost on points in the semi-final of the bantamweight class to the famous American Pal Moore, who went on to beat the legendary Jimmy Wilde in the final. 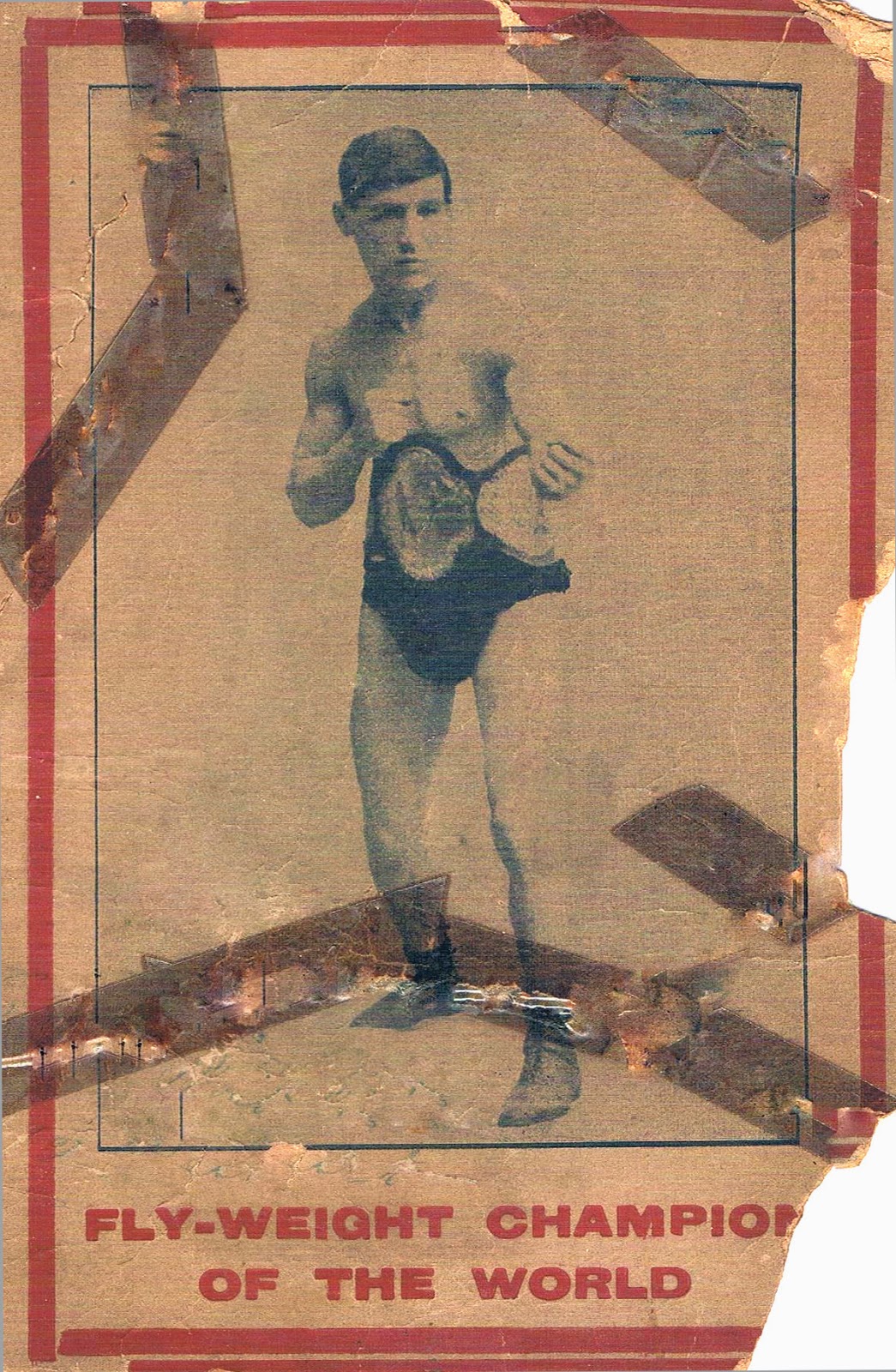 Johnny also fought Wilde himself. They met at the National Athletic Ground, Kensal Rise, on 31 July 1916, in a 20 three-minute rounder for Wilde’s world flyweight title. According to June Hurst, Johnny suffered a sleepless night on the eve of the fight while caring for his sickly newborn daughter and was in a weary state when he took to the ring. Despite a valiant effort from Johnny, Wilde won this one-sided content with a tenth-round KO. By then, though, Johnny was a battle-worn veteran of 33.

He was aged 40 when he finally hung up the gloves in 1923, by which time he had already begun a new career as a small-hall fight promoter. He carried on promoting shows at London halls in areas such as Euston, Camden Town, Pimlico, King’s Cross and Catford for many years.

As well as staying involved with boxing Johnny appeared many times as a film extra, a job he had enjoyed since his early boxing days and which he continued into the post-World War 2 years. He appeared in such films as David Lean’s Great Expectations and Oliver Twist, Vice Versa (which starred a young Anthony Newley) and Night and the City, which starred Richard Widmark.

Comedy actor Arthur Mullard, who met Johnny on the film sets, remembered him as ‘an extrovert character who talked boxing every day of his life’.

Mullard recalled:  ‘Walt Disney was making a film at Pinewood and Johnny was in the crowd. The pair of them used to talk quite a lot about the fights. One day during the course of conversation, Walt Disney asked Johnny if he had ever met Bernard Shaw.

‘Johnny, without hesitation at all, said: “Yes, I knocked him out in two rounds!”’

Despite hobnobbing with film stars and movie moguls, life after boxing wasn’t all glamour and glitz for Johnny, who had clearly earned far less from boxing than his considerable talent deserved. As well as promoting, at various times he managed a gym, ran a ‘totting’ business and worked as a bookmaker’s runner to feed his wife and children.

Charles Henry Hughes – known in boxing circles as Johnny Hughes – died of cancer on 27 July 1953, with 146 known professional fights to his credit and probably many more that go unrecorded. He is buried at Finchley Cemetery, but there is nothing on his grave inscription to show that he was once a famous boxer. I hope this small tribute will, to some degree, put right this omission.

My thanks to June Hurst for background info on Johnny Hughes and the images that appear with this article.

Alex Daley is the author of Fighting Men of London: Voices From Inside the Ropes.
Find out more about the book.