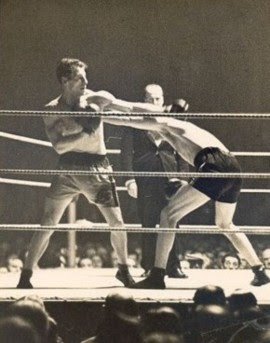 Sadly but undeniably the sport of boxing is in decline. Today Britain has only a few hundred active pro boxers who, with a few exceptions, fight just a handful of times each year. With such a paucity of action competitive matches are harder to come by, and even the fights that do produce 'the goods' seldom receive the media coverage they deserve.

In days gone by, however, the fistic landscape was different. Prior to World War 2 Britain had thousands of pro boxers, men who fought week-in and week-out at venues nationwide. Boxing was then a sport of the masses, akin to professional football in Britain today. Our leading boxers were national idols, the lesser-known ones local heroes, and boxing made the newspaper headlines without fail, every edition.

So boxing has an important place in Britain's heritage. It is our aim – through this blog and our forthcoming website – to honour that heritage and the men who helped to create it. We will examine both the sport and its underlying social influences. Just what drove men to punch for pay and why was boxing so popular?

Boxinghistory.org.uk is our forthcoming website. Along with this blog, it will be the first port of call for anyone wanting to know more about Britain's boxing past. On it you'll find a wealth of information, previously unpublished fight records and rare photos.

As soon as the website goes live we'll make an announcement via this blog, so make sure you bookmark us (press 'Ctrl' and 'D' on your keyboard) and check back often. There's plenty of exciting British boxing history heading your way!